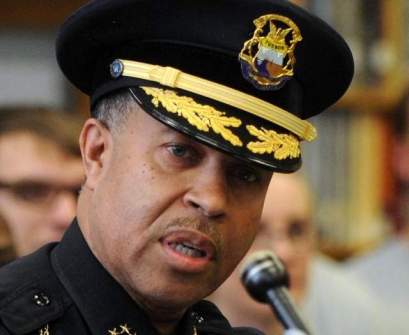 The Police Chief in Detroit, whose city has a very high crime rate,  needs all the help he can get. He recommends that people get concealed pistol permits and carry guns, because it will cut the crime rate and make Detroit safer.

Finally a Police chief in a big city who is living in the real world instead of the Liberal fantasy world.  I am sure liberals in Detroit are spontaneously combusting when they heard of this comment.

Urban police chiefs are typically in favor of gun control or reluctant to discuss the issue, but Craig on Thursday was candid about how he’s changed his mind.

“When we look at the good community members who have concealed weapons permits, the likelihood they’ll shoot is based on a lack of confidence in this Police Department,” Craig said at a press conference at police headquarters, adding that he thinks more Detroit citizens feel safer, thanks in part to a 7 percent drop in violent crime in 2013.

Craig said he started believing that legal gun owners can deter crime when he became police chief in Portland, Maine, in 2009.

“I changed my orientation real quick. Maine is one of the safest places in America. Clearly, suspects knew that good Americans were armed.”

Craig’s statements Thursday echoed those he made Dec. 19 on “The Paul W. Smith Show” on WJR (760 AM), when he said: “There’s a number of CPL (concealed pistol license) holders running around the city of Detroit. I think it acts as a deterrent. Good Americans with CPLs translates into crime reduction. I learned that real quick in the state of Maine.”

Robyn Thomas, director of the the Law Center to Prevent Gun Violence in San Francisco, disagreed.

“I think at its core, his position is an emotional one, based on the idea that people feel safer when they have guns. But studies have shown more guns don’t deter crime,” Thomas said. “There’s no research that shows guns make anyone safer, and it does show that, the more guns in any situation, the higher the likelihood of them harming either the owner, or people who have access to them.”

Rick Ector of the Firearm Academy of Detroit, which teaches gun safety classes, said Craig’s comments are unusual for a police official.

“It’s a huge, radical departure for the police chief to say good people should have access to firearms,” said Ector. “I’m not ready to say he’s pro-gun just yet, but it’s vastly different from what police chiefs have said in the past.”

“A lot of police officers have no problem at all with law-abiding citizens having guns,” Stevenson said.

“I think it’s probably like the citizenry: Some are for it, some are against it. But most police chiefs don’t want to talk about the subject.

“It’s a divisive issue, and a lot of times chiefs are reluctant to get in the middle of those debates. Gun control, the death penalty — most chiefs try to stay out of those discussions. Craig speaks his mind; you’ve got to give him credit for that.”

According to a March 2013 anonymous poll of 15,000 officers by the law enforcement website policeone.com., almost 90 percent of the respondents believed casualties would be decreased if armed citizens were present during shooting incidents, while more than 80 percent supported arming teachers who were trained with firearms.

Although Craig said more responsible gun owners would likely lower crime, in the past he also has called for a ban on assault weapons, regulating high-capacity magazines, tighter restrictions on Internet ammunition sales and more stringent background checks for merchants who sell firearms at gun shows.

Detroit police have reported 73 justifiable homicides in the city since 2011. The number in 2013 was 15, down from 25 the previous year.

Most of those cases involved citizens who defended themselves by killing criminals. Among them: 77-year-old Willie White, who in March 2012, fatally shot a man who’d broken into his northwest Detroit home.

Prior to the incident, White’s home had been broken into several times. The break-ins stopped after he killed the 18-year-old intruder, he said.

“I think these criminals would definitely think twice if they knew more citizens were armed,” White said. “I know it stopped them from breaking into my place.”