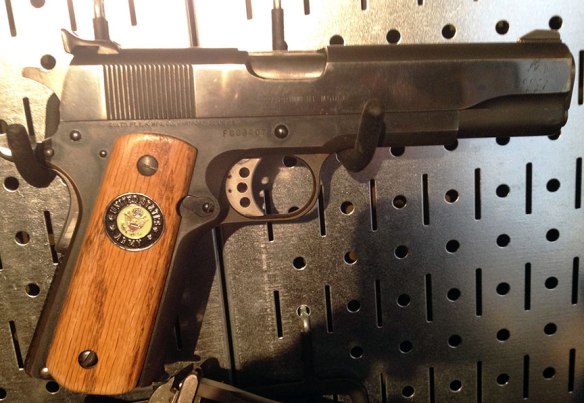 Every week on Wednesday, I feature a gun from my collection. This week it is a Colt 1911 Government Model. Mk IV series 80 in .45 ACP.  You can see all the previous gun of the week posts here.

This gun is actually owned by my son. It is kept in our gun room, so it is technically part of my collection. It was given to him by my father-in-law, his grandfather a former Navy Officer, and retired policeman.  My son got to choose from the 12 different 1911’s that his grandfather had in his collection. He chose this one. It came with factory grips and I bought the Arm grips for it as a Christmas present 2 years ago. At the time, my son wanted to be a Army Pilot. He’s 17, he may or may not end up in the army.  He is already a pilot.

This particular pistol is a MK IV series 80 Colt series 80, a model  introduced in 1983 by Colt’s Manufacturing Company. The main difference between this guns and the previous Colt series 70 is that the former incorporate a new firing pin block safety system, consisting of a series of internal levers and a plunger positively blocking the firing pin from moving until the trigger is pressed, hence eliminating the possibility of the gun going of if dropped onto a hard surface or struck hard. Other than that, the Colt series 70 and the 80 series do not differ too much from one another. On the other hand, there is really no difference between the Colt 1911 series 80 and the M1991A1, which is mechanically the same as the colt 1911.

The Colt 1911
The M1911 is a single-action, semi-automatic, magazine-fed, recoil-operated pistol chambered for the .45 ACP cartridge,which served as the standard-issue sidearm for the United States Armed Forces from 1911 to 1985. It was first used in later stages of the Philippine-American War, and was widely used in World War I, World War II, the Korean War, and the Vietnam War. The M1911 is still carried by some U.S. forces. Its formal designation as of 1940 was Automatic Pistol, Caliber .45, M1911 for the original Model of 1911 or Automatic Pistol, Caliber .45, M1911A1 for the M1911A1, adopted in 1924. The designation changed to Pistol, Caliber .45, Automatic, M1911A1 in the Vietnam era.   In total, the United States procured around 2.7 million M1911 and M1911A1 pistols in military contracts during its service life. The M1911 was replaced by the 9mm Beretta M9 pistol as the standard U.S. sidearm in the early 1990s, but due to its popularity among users, it has not been completely phased out. Modernized derivative variants of the M1911 are still in use by some units of the U.S. Army Special Forces, the U.S. Navy and U.S. Marine Corps.

Designed by John Browning, the M1911 is the best-known of his designs to use the short recoil principle in its basic design. The pistol was widely copied, and this operating system rose to become the preeminent type of the 20th century and of nearly all modern centerfire pistols. It is popular with civilian shooters in competitive events such as USPSA, IDPA, International Practical Shooting Confederation, and Bullseye shooting. Compact variants are popular civilian concealed carry weapons, because of the design’s inherent slim width and the power of the .45 ACP cartridge.

Design
Browning’s basic M1911 design has seen very little change throughout its production life.The basic principle of the pistol is recoil operation.As the expanding combustion gases force the bullet down the barrel, they give reverse momentum to the slide and barrel which are locked together during this portion of the firing cycle. After the bullet has left the barrel, the slide and barrel continue rearward a short distance.

At this point, a link pivots the rear of the barrel down, out of locking recesses in the slide, and the barrel is stopped by contact of the lower barrel lugs against the frame’s vertical impact surface. As the slide continues rearward, a claw extractor pulls the spent casing from the firing chamber and an ejector strikes the rear of the case, pivoting it out and away from the pistol. The slide stops and is then propelled forward by a spring to strip a fresh cartridge from the magazine and feed it into the firing chamber. At the forward end of its travel, the slide locks into the barrel and is ready to fire again.

The military mandated a grip safety and a manual safety.  A grip safety, sear disconnect, slide stop, half cock position, and manual safety (located on the left rear of the frame) are on all standard M1911A1s.  Several companies have developed a firing pin block safety. Colt’s 80 series uses a trigger operated one and several other manufacturers, including Kimber and Smith & Wesson, use a Swartz firing-pin safety, which is operated by the grip safety.Language cautioning against placing the index finger along the side of the gun to assist in aiming was included in the initial M1911 manual, and later manuals up to the 1940s.

World War I
By the beginning of 1917, a total of 68,533 M1911 pistols had been delivered to U.S. armed forces by Colt Firearms Company and the U.S. government’s Springfield Armory. However, the need to greatly expand U.S. military forces and the resultant surge in demand for the firearm in World War I saw the expansion of manufacture to other contractors besides Colt and Springfield Armory, including Remington-UMC, North American Arms Co. of Quebec. Several other manufacturers were awarded contracts to produce the M1911, including the National Cash Register Company, the Savage Arms Company, the Caron Bros. of Montreal, the Burroughs Adding Machine Co., Winchester Repeating Arms Company, and the Lanston Monotype Company, but the signing of the Armistice resulted in the cancellation of the contracts before any pistols had been produced.

WWII
World War II and the years leading up to it created a great demand. During the war, about 1.9 million units were procured by the U.S. Government for all forces, production being undertaken by several manufacturers, including Remington Rand (900,000 produced), Colt (400,000), Ithaca Gun Company (400,000), Union Switch & Signal (50,000), and Singer (500). New M1911A1 pistols were given a parkerized metal finish instead of blueing, and the wood grip panels were replaced with panels made of brown plastic. The M1911A1 was a favored small arm of both US and allied military personnel during the war, in particular, the pistol was prized by some British commando units and the SOE as well as Commonwealth South African forces.

So many 1911A1 pistols were produced during the war that the government cancelled all postwar contracts for new production, instead choosing to rebuild existing pistols with new parts, which were then refinished and tested for functioning. From the mid 1920s to the mid 1950s thousands of 1911s and 1911A1s where refurbished at U.S. Arsenals and Service depots. These arsenal rebuilds consisted of anything from minor inspections to major overhauls of pistols returned from service use. Pistols that were refurbished at Government arsenals will usually be marked on the frame/receiver with the arsenals initials, such as RIA (Rock Island Armory) or SA (Springfield Armory).

Among collectors today, the Singer-produced pistols in particular are highly prized, commanding high prices even in poor condition.

The M1911A1 is popular among the general public in the United States for practical and recreational purposes. The pistol is commonly used for concealed carry thanks in part to a single-stack magazine (which makes for a thinner pistol that is therefore easier to conceal), personal defense, target shooting, and competition. Numerous aftermarket accessories allow users to customize the pistol to their liking. There are a growing number of manufacturers of M1911-type pistols and the model continues to be quite popular for its reliability, simplicity, and patriotic appeal. Various tactical, target, and compact models are available. Price ranges from a low end of around $400 for basic pistols imported from the Philippines or Turkey (Armscor, Tisas, Rock Island Armory, Girsan, STI Spartan) to more than $4,000 for the best competition or tactical versions (Wilson Combat, Ed Brown, Les Baer, Nighthawk Custom, and STI International..

The Springfield Custom Professional Model 1911A1 pistol is produced under contract by Springfield Armory for the FBI regional SWAT teams and the Hostage Rescue Team.[24] This pistol is made in batches on a regular basis by the Springfield Custom Shop, and a few examples from most runs are made available for sale to the general public at a selling price of approximately US$2,700 each.