Freddy’s Note:
I saw this chart on the all over the internet today and I just had to re-blog it.  This chart put together with data from the Center for Disease Control is the best thing I have every seen in arguing against the gun banners and more gun laws and also against climate change. 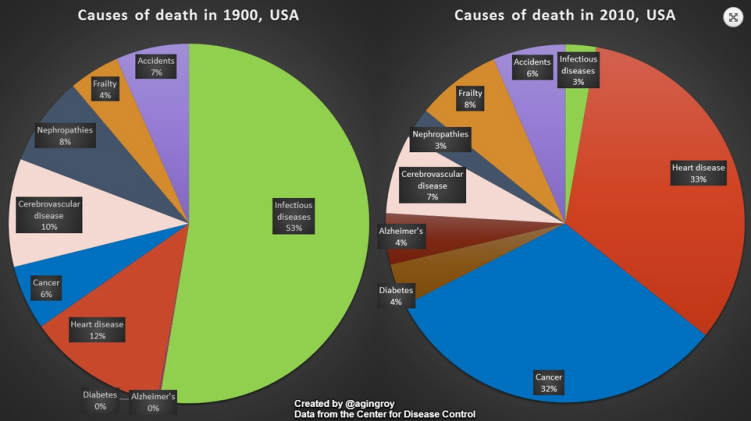 What you’ll see is that America has been whipping infectious diseases for over a century, thanks to better sterilization, sanitation, and vaccination techniques, and now, Americans are living nearly twice as long. Currently, the average age is around 79 years old, and back in 1900, it was about 47 years old. Some “crisis” we have on our hands.
But it’s what you don’t see on this chart that is really the story. Natural disaster and extreme weather-related deaths don’t even make the chart.

In light of the federal government’s drive to enforce stricter environmental regulations for the reason of combatting man-made “climate change,” it should be said that 98% fewer people are dying from extreme weather events or natural disasters than in the 1920s. Extreme weather events currently comprise about 0.07% of all fatalities globally.

We’re also being told about the danger posed by law-abiding citizens possessing firearms. But where is that threat on this chart? Let me help you: It’s not there. Deaths from firearms totalled 31,672 in 2010 (just to keep the comparisons apples to apples). In that year, around 19,392 of those deaths were from firearms-related suicides (half of all suicides).
What about accidents? Around 570 of those were from firearms of a total of 126,100 accidents. Firearms murders, mostly by handgun, came to about 8,775 counts (of 12,996 total murders) in 2010, according to FBI statistics.

Where does this put these in the big picture? Deaths from heart disease in 2010 were 595,444 total, while deaths from cancer were 573,855. One factor for such high rates to keep in mind is that Americans are dying from causes that strike those who live longer than human beings ever did.

Since we live in a nation where many don’t get enough exercise and many eat a lot of fatty foods, a lot of people are dying from not moving around enough and/or eating too much food. Want to talk about “first world problems.”

There’s been hysteria about guns, natural disasters, non-organic foods, vaccinations, SARS (oh wait, that was a few years ago), pig flu (off again, shoot), killer bees, hysteria about hysteria – it has been getting really ugly out there.

We would never accuse bureaucrats or the media of drumming up public paranoia just for more taxpayer bucks or to boost political authority. Let’s just say their “awareness raising” lacks context.