We had a good year.. well it was only two months ago that I started this blog. Thanks everyone for visiting and commenting on the articles here or on one of the social media’s sites that we publish to.

Gun Owners had a good year for most part unless you live in California, New York or CT. If you live in one of these Police States, then I recommend you move.

The rest of America lost more freedoms as Obama continues to convert Americna into a Police State. Here’s hoping that American’s will wake-up in 2014.

I hope everyone has a Happy and Safe New Year.  If you are going out and not drinking, it might be a good night make sure that you are carrying tonight.  There will probably be many  Drunk maniacs out on New Years Eve. Stay Stafe

TOP POSTS OF THE YEAR

The following were the three most popular posts here on http://www.crypticpunk.com

1)  Eyewitness to Hitler Warns: “Keep Your Guns and Buy More Guns”
2)  Building the Fully Legal Semi Automatic UZI Carbine
3)  It is time to create a registry of all people that want to ban guns

See you next year.

For new people to the blog, I did a series on how to built your own fully legal UZI carbine.  You can see the complete instructions here.

I found a series of cases from AKcases, and ordered one off their ebay site for $175. They are normally $245 and they have them for many different styles of guns. I just received the case. Here is the violin case closed:

Here is the case open. The case comes with either a red or blue interior. I chose blue.

And finally here the case with the UZI carbine, I made during the build:

The Velcro strips hold both the gun and up to 8 magazines. The interior and exterior is very good quality.

I highly recommend this case. The only problem is this case, looks just like my kid’s actual violin case, it

pretty embarrassing ( and highly illegal) if he took the wrong case to school. So I can’t leave this outside the gun room.

See parts 1-5 for instructions to source the parts and built your own Fully Legal semi-automatic UZI carbine.  I was delayed almost two weeks because of bad weather and a one week business trip, before I could take my new fun toy to the outdoor range and test it.

Above of pictures taken during the first firing of the finished Semi Automatic Uzi Carbine at the local gun range.

So my son and I took the completed UZI to the local gun range and we finally got to see if it would work. The UZI takes a little while to get used to, because of the grip safety.  This is the only gun I own that has a grip safety. So you have to push in the grip safety completely while you pull the trigger or nothing will happen.

I loaded the magazine, engaged the safety and the gun fired perfectly. This video below is a video of the actual first time, the gun has been fired.

There are 5 posts under the category Building the Uzi that explain where to get the receiver and parts and how to put them together. It has been a fun build and it did not take much skill other than to figure out how the parts went together.  I am completely happy with the build and I might even do it again and build a UZI pistol next time.

If you build yourself one from these directions, let me know if I missed anything.

Thanks and enjoy  Freddy

See Parts 1 through 4 for the steps that need to be done, before you finish the build in this post.

The stock needs to be installed now before you install the bolt. Because the retaining bolt sits behind bolt and buffer block.

The round part of the retainer nut, hangs out the back of upper receiver.

Here is the stock I used. There several types of metal and wooden stocks available. You may have to use a wooden stock with this gun, depending on gun laws in your state.  In my state, I can use anything.e an 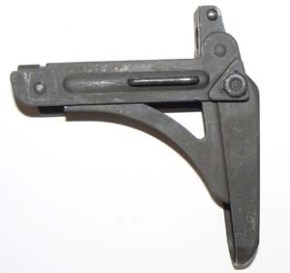 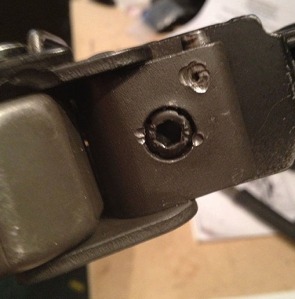 The 3 holes in the different pieces must line up.

Here is what the Striker looks like when it is finished.

The recoil spring is a large spring that will push the bolt back forward again to load another bullet and cock the action.

When you buy it separately or in a parts kit, it comes with a hard cardboard tab at the end of the spring. Very carefully cut the cardboard off without damaging the spring.

Here it is before

And after you cut off the orange brown tab.

Install Extractor into the bolt assembly 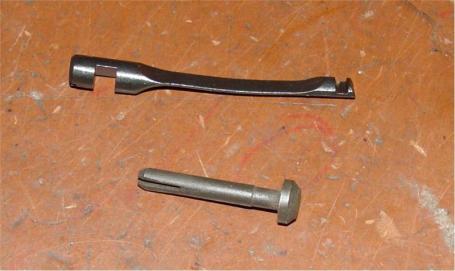 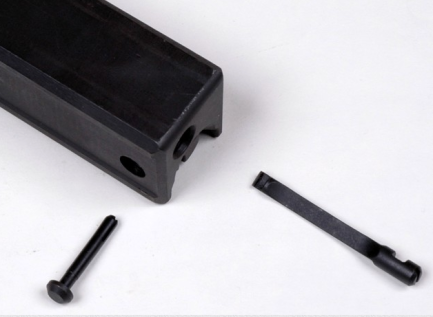 You can tell which end of bolt that the extractor is installed into but located the hole on the side of the bolt for extractor retaining pin. Then slide the bolt into the bolt assembly. Line up the notch in the extra to the hold and push the retaining pin in.

After the extractor is installed the inside of the bolt should look like this:

The blocking latch prevents (or at least reduces) the possibility of having a round go off out of battery. If the round doesn’t chamber properly for any reason (bad ammo, dirty gun,…).  the a small spring and a small pin hold it in place. The spring and latch look like this:

Put the striker spring on the opposite side of the firing pin on the black clyinder. Then insert the  large recoil spring in the round hold in the rear center of the bolt.  It will look like this:

Twist the striker assembly so the black lever fits into the groove on the right side of the bolt.

Here is a closeup of the two components fitting together.

Take the black buffer block and position it so the recoil spring goes in the hold at the top and the striker spring does into the larger hole at the bottom.

Be careful with the whole assembly, it is not fixed together. The components will fall apart if you are not careful.

Now you take the whole assembly and insert it ,buffer block first into the back of the receiver.  You will have to compress the spring by compressing the bolt towards the buffer block.  The buffer block will slip mostly out of site under the top cover catch and rear site assembly.  It will look like this.

Once the buffer block is in place under the rear site/top latch, keep compressing the spring until the whole block fits into the receiver.

Joining the top Receiver and the Bottom receiver 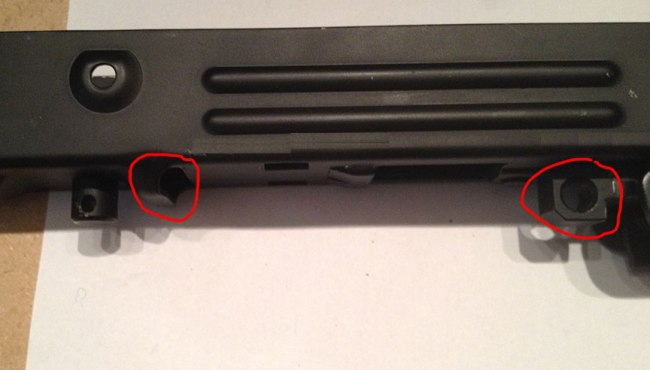 So take the bottom  receiver/pistol grip stick and a angle and try to get the tab to fut into the opening (red circled). 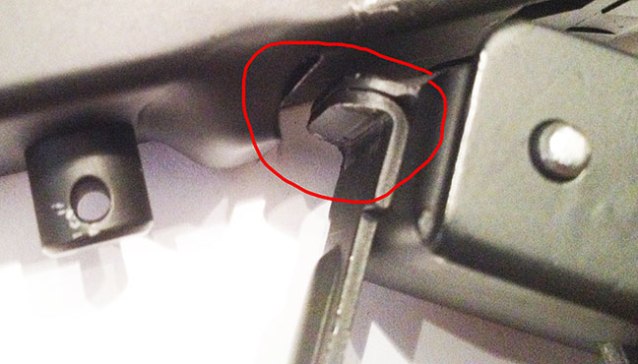 Once you have the bottom part inserted into the tab of the upperpart, then push the bottom towards the upper until it touches.

Then a pin mm is inserted through one side of upper, through the lower and out of the other side of the upper. Use a rubber hammer to push the pin through The hole win the pin is inserted is circled in red in the picture below.

Try to Dry Fire it

Once the pin is installed, you are done, the built is complete. You can now test to see if the components are properly installed by pulling back on the cocking handle on the top cover, then releasing it.

Now try to dry fire it by simultaneously holding the grip safety and pulling the trigger.  If it goes click, then you are mostly likely ready to test it with blanks or real bullets.  If it does not dry fire, you may have to take the upper and lowers apart and the top cover off to inspect the fit of the parts, or to see if there is something impeding the bolt or the trigger.

Here is my finished semi-automatic UZI Carbine. In my final post, I am taking the gun to the range and will have pictures and video of the first time we shoot it. 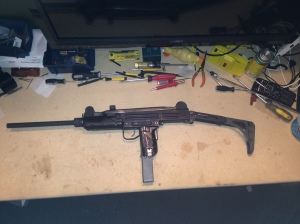 Now that I an finished with a Uzi Carbine. Maybe I will have to get myself a Uzi Pro Pistol as well.

IWI US, Inc.  a subsidiary of Israel Weapon Industries (IWI), announces the arrival of the long-awaited UZI® PRO semi-auto pistol for the American consumer market. The UZI® brand is world renowned with sales of over 2 million units worldwide since 1963. The UZI® sub-machine gun (SMG) was designed and patented by Uziel Gal who gave the production rights to the Israeli Ministry of Defense. After initial testing by the IDF, the Ordnance Corps ordered 8,000 units and the love affair with the world’s most iconic pistol continues today.

The UZI® PRO semi-auto pistol is the latest evolution featuring the most advanced firearms technologies. Based on the famous UZI® SMG, the UZI® PRO Pistol is purpose-built with only one goal – uncompromising performance and reliability on a robust design. This 9mm Luger Parabellum version for the American public sports an advanced polymer pistol grip that incorporates an integrated magazine release…

M1 with non-folding stock. What my Rockola originally looked like.

This is not an original configuration. I want to say that right up front, before people correct me.  This is a an original WWII Rockola. Someone modified to use a aftermarket stock.  The gun is original. The stock is not. Rockola did not make a folding stock. The original M1-carbines had a sold stock. The M1A1 were the paratrooper models with the folder stock. And Yes this gun was originally made by the Rockola June Box company during World War II. Over 20 companies made the M1 carbine for the US Government including the Underwood Typewriter Company, National Postal Meters, and IBM.  After the war continuing until today, many other companies have offered M1carbines in both the original .30 carbine caliber and .22 LR.

History of the M1 Carbines

Between June 1942 and August 1945 ten primary U.S. contractors manufactured over 6 million U.S. .30 Caliber Model M1, M1A1, M2, and T3 Carbines. During World War II these carbines were issued to U.S. soldiers in every theater of war around the world. M1 Carbines were supplied to a number of Allies via the Lend/Lease Program during WWII. Carbines were smuggled into, or parachuted to, resistance groups in a number of different countries during the war.

With the onset of the Korean War in 1950, the .30 Caliber Carbines once again served American troops and America’s Allies. However, during this war the decision was made to offer the .30 Caliber Carbines as a main battle rifle, a role it was not designed for. It’s not surprising the carbines used in Korea received a reputation as totally inadequate. The wrong tool for the job at hand. City fighting at distances of less than 200 yards, the carbines were usually adequate, which would later make them popular with police departments around the world.

Of the over 6 million carbines built, over half were at some point provided or sold to other nations as military assistance (see below). Many of these nations sold part or all of their carbines to other countries around the world.

I know the stock is not original and I don’t mind.  I have a picture of dead father holding a M1 carbine with a folding stock taken in Korea during the War.  When I saw it in a local gun store, I had to have it. It gave me some connection to my dead father.